Theragun is probably the most infamous name in the massage gun market. It was the first company to popularize the device and has remained a dominant force in the market. The third iteration of their devices saw the release of the Theragun liv, G3, and G3Pro. The G3Pro is of course the most expensive of the three.

I have a lot of massage guns because I review them for this site. So of course I had to buy the G3Pro too. So how does it hold up against Theragun's other products and against other competitors on the market? Is it worth the extremely high price tag? Below is my full review of the gun as I discuss the pros and cons of the guns, and whether or not the gun is worth it.

Below are the features and stats of the gun:

For each of the features above, I will be talking about how it stacks up against the other popular guns on the market. If you want to just skip this section and see what I rate it, you can just scroll down to the summary.

Difference in Features of G3 and G3Pro

Here are the main differences between the G3 and the G3Pro

For a more comprehensive analysis of the two massagers, go to this article.

The gun is definitely the strongest I've tried thus far. The gun has a 16 mm stroke length, operates up to 2,400 strokes per minute, and has a stall force of 60 pounds. All this combined makes for a satisfyingly deep massage.

Like its sibling (the G3), I am unable to use the second speed for too long around areas with a lot of tenderness and scar tissue. I had shoulder surgery a few years ago and I am always looking for something that will really get in there and relieve the tightness. Most other massagers do an okay job in that area but this one does an excellent job. I have to turn it down to the first speed after a couple of minutes around the shoulder area as it gets painful. I haven't been able to say that about any other massage gun (besides the G3).

The nice thing about having two external batteries is you don't have worry about battery degradation. As you probably already know, batteries degrades over time with usage. As such, we should expect battery life of our massagers to eventually degrade. So it is nice to have an extra battery handy to change out so the batteries last longer. Additionally, replacing the battery is as easy as just ordering a new one from the company. It isn't as simple with devices running on internal batteries.

Although this massage gun is much quieter than the previous iteration (about 50% according to Theragun), I feel that this is a huge area that the company can still improve on. It is actually one of the noisier massage guns I own. It operates at 68 and 72 decibels, which is about the sound of noise in a car driving down the freeway. While this noise level is not dangerous, it does sound like I am operating a power tool. There are a few massage guns that operate at under 40 decibels now so I have no doubt that Theragun will be able to make it quieter in the future without sacrificing power.

The purpose of the articulating arm was to adjust the arm so that you can pretty much massage anywhere on your body with ease. The device allows you to adjust the arm in four different positions to more conveniently massage your back area.

I thought this would a feature I would use a lot with the gun but I found myself barely using it. This is in part thanks to Theragun's great handle design. The triangular handle allows you to grab the gun from multiple positions so it made massaging the back or the glutes a breeze. So while the articulating arm is a great feature in theory, I found myself not using the feature due to the gun's great ergonomic design.

The device comes with 6 detachable massage heads, which is pretty much the norm for many massagers these days. Here are the massage heads and their suggested use according to Theragun:

Theragun has a mobile app and you can access it with a purchase of any of their guns. The mobile app is simple and intuitive. It contains step-by-step instructions that shows you how to use the gun optimally. The instructions are categorized by body parts and purpose. The video below shows you a little preview of the Theragun mobile app:

The massage intensity is unrivaled by anything else on the market. The articulating arm is a nice feature that allows you to massage anywhere on the body with easy. The external batteries solves the problem of a short battery life that the G3 suffers from. The device feels extremely durable and is light for such a powerful massager. However, the gun needs to improve on the noise. For such a pricey gun, I would want it to be much quieter. I do not think the high price tag is worth the extra features it offers over the G3. And you can get pretty much the same great massage for less with a couple of other massagers on the market, like the TimTam Power Massager Pro or the Theragun G3. 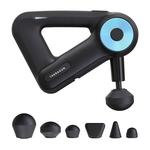